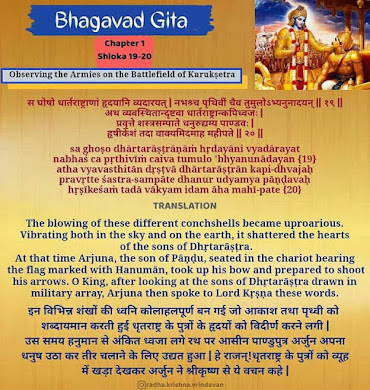 Then, seeing the people of Dhritarashtra’s party standing

arrayed and the discharge of weapons about to begin, Arjuna, the son of

Pandu, whose ensign was a monkey, took up his bow and said the following

to Krishna, O Lord of the earth.

PURPORT
The battle was just about to begin. It is understood from the above statement that the sons of Dhṛtarāṣṭra were more or less disheartened by the unexpected arrangement of military force by the Pāṇḍavas, who were guided by the direct instructions of Lord Kṛṣṇa on the battlefield. The emblem of Hanumān on the flag of Arjuna is another sign of victory because Hanumān cooperated with Lord Rāma in the battle between Rāma and Rāvaṇa, and Lord Rāma emerged victorious. Now both Rāma and Hanumān were present on the chariot of Arjuna to help him. Lord Kṛṣṇa is Rāma Himself, and wherever Lord Rāma is, His eternal servitor Hanumān and His eternal consort Sītā, the goddess of fortune, are present. Therefore, Arjuna had no cause to fear any enemies whatsoever. And above all, the Lord of the senses, Lord Kṛṣṇa, was personally present to give him direction. Thus, all good counsel was available to Arjuna in the matter of executing the battle. In such auspicious conditions, arranged by the Lord for His eternal devotee, lay the signs of assured victory.