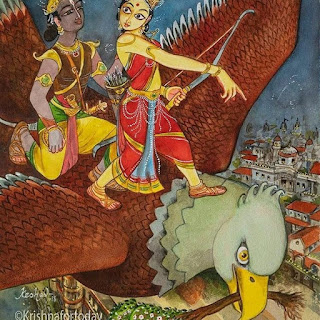 Diwali is celebrated as a Five day festival across major parts of India and each day has a different story behind it. One Diwali story in particular strikes out loud – Narakchaturdashi – the story of Krishna and his wife Satyabhama killing the demon Narakasura. This story not just celebrates the usual victory of good over evil but of mutual respect, understanding of the wife and husband shows how a victory and perfect partnership can be achieved in marriage when there is gender equality in the relationship. Let us revisit their relationship and learn more about the warrior wife of Lord Krishna, Satyabhama on this day as the world celebrates the Diwali.

Satyabhama is the only child of the Yadava chief Satrajit.  Even though at the time it was more common to raise boys in martial arts and athletic pursuits  Satyabhama was trained to be a warrior by her father. Satyabhama is believed to be an Avatar or incarnation of Bhudevi.

Satrajit was the owner of the Shamantaka jewel. Satrajit secured the jewel from Surya and therefore never wanted to part with it even once when Krishna, asked for it he said that the jewel would be safe with him. After some time, Prasena, the brother of Satrajit went out hunting wearing the jewel but was killed by a lion. Then Jambavan (Jamvanta,) killed the lion and gave the jewel to his son to play with it. When Prasena did not return, Satrajit wrongly blamed Krishna for killing Prasena for the sake of the jewel.

Krishna to prove himself innocent set out in search of the jewel and found it in Jambavans cave, with his child. Jambavan attacked Krishna thinking him to be a trespasser who had come to take away the jewel. Both of them fought for continuous twenty-eight days. At last Jambavans whole body was horribly wounded from the thrashing of Krishna`s fists. Jambavan recognised Krishna as the Avatar of Lord Vishnu and surrenders. Jambavan was remorseful and gave Krishna the jewel.

Then Krishna returned the jewel to Satrajit, who also repented for his allegation. He offered Krishna the jewel and also wanted Krishna to marry his daughter Satyabhama . Krishna accepted Satyabhama`s hand but denied from accepting the jewel, Satyabhama became the third wife of Krishna.

Satyabhama was haughty and high-spirited and had very little interest in men until she met Krishna. Unlike his other wives who were satisfied to stay at home, Satyabhama demanded to accompany Krishna as a helpmate in all fields, including warfare, for which her father had given her ample training. Krishna admired her enough as to never say ‘no’ to her.