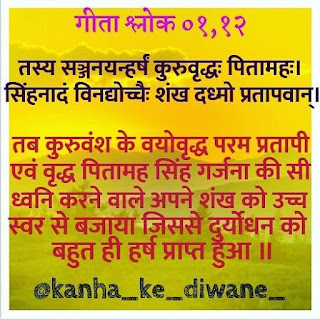 MEANING OF SLOKA:- His glorious grandsire (Bhishma), the oldest of the Kauravas,

in order to cheer Duryodhana, now roared like a lion, and blew his conch.

PURPORT
The grandsire of the Kuru dynasty could understand the inner meaning of the heart of his grandson Duryodhana, and out of his natural compassion for him he tried to cheer him by blowing his conchshell very loudly, befitting his position as a lion. Indirectly, by the symbolism of the conchshell, he informed his depressed grandson Duryodhana that he had no chance of victory in the battle, because the Supreme Lord Kṛṣṇa was on the other side. But still, it was his duty to conduct the fight, and no pains would be spared in that connection.